Some years ago I was working a company where a new senior leader had just started. Everyone was talking about him; what would he be like, what kind of a boss would he be, had anyone met him yet and what was their impression? Soon the rumours began that he was not such a nice person, people thought he was checking up on them, judging them and they were worried about what he would do with this information.

Shortly after this I attended a meeting he was also present at. He sat at the back in the corner, had a notebook in which he wrote many things during the one hour meeting and did not say anything. After the meeting I went and asked him how he was settling in to the company and his new role. He explained that this was a higher position than his last job and in a different industry. It meant that he felt he had a lot to learn about the culture, the company and his role before he would really settle in. I asked him what kind of notes he was taking and he showed me his notebook filled with learnings for himself, nothing to do with the people.

This was when I first learned that 'not communicating' at all is still communicating a message. People had expectations about him and his role that were only in their heads and they were making assumptions about everything he did that supported these assumptions. Saying nothing had indeed communicated a message to the people around him that was not the one he wanted to communicate.

I shared my observation with him and we discussed how he could change this perception. He decided to start telling people how he felt and that he had a lot to learn. He asked people for their help and contributed in meetings if only with more questions for a while. His interaction with people and honesty started to change their view of him. They started to talk about what a nice guy he was, how he was taking time to learn and was respectful of them and their roles.

You can almost never over communicate.

Throughout my experience I learned that not communicating enough is one of the biggest problems you can have as a leader, because people fill in the gaps themselves with things that are rarely correct. In fact I believe you can almost never over communicate. 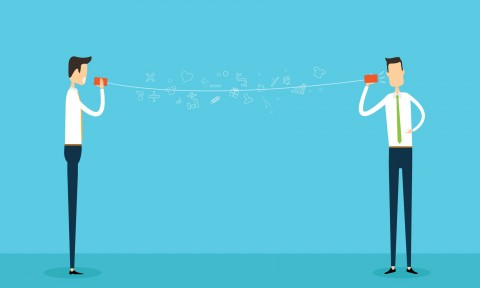 As a new leader the first thing you can do is take time to talk with your people, not only to share more about yourself, your plans for the department, your current priorities or how you would like the team to work, but also to ask lots of questions and really get to know them; how do they feel in their role, is it comfortable, challenging, boring or overwhelming, what support or changes would they appreciate, what ideas do they have about the future of the team, things that need improving etc.

When you communicate you are not only exchanging information you are making a connection with a person, building trust, creating understanding and a solid base for your future co-operation. We can say this is the foundation for everything else you want to accomplish as a leader. With this, your job becomes much easier and your team become much happier and more motivated. This enables all of you as a team to accomplish more together and feel good about what you are doing.

When you communicate you are making a connection with a person

So, every day, take time to talk, chat, share, ask questions, discuss ideas, find out concerns, fears and wishes. Use what you learn to motivate and develop more, find every possible way to help your people to succeed and you will succeed too.

What is your next step to take your communication to a new level?